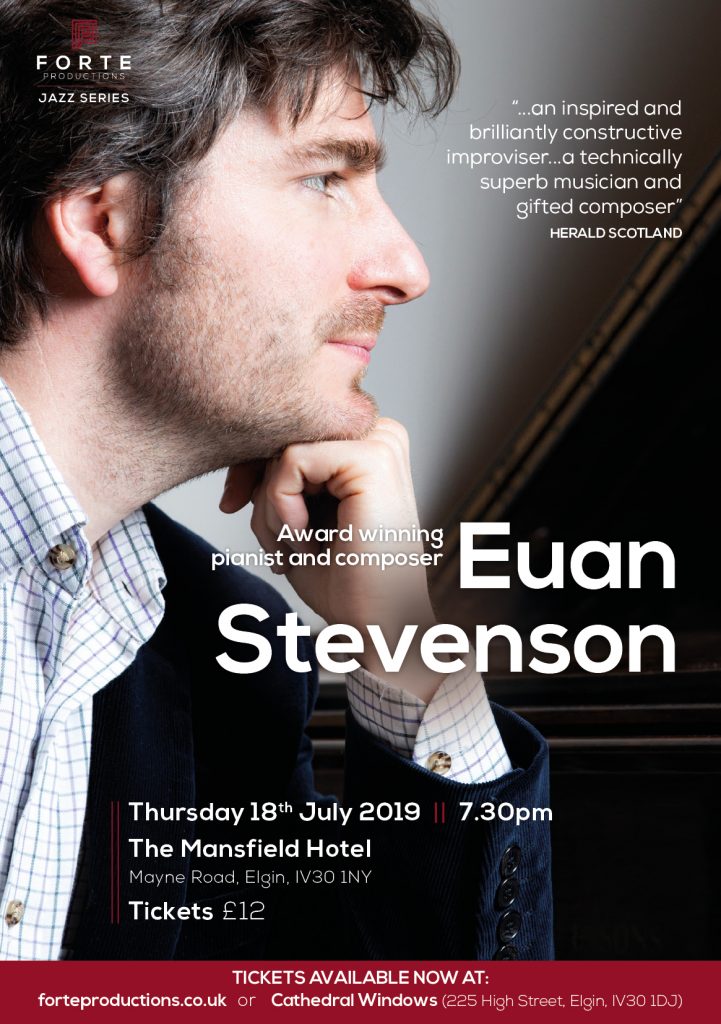 Euan Stevenson takes the spotlight to kick off Forte Productions’ 2019 programme with a night of jazz in the intimate setting of Elgin’s Mansfield Hotel.

Euan is an award winning Scottish pianist and composer pianist working in jazz, classical and pop fields. He performs throughout the UK and internationally, his music regularly broadcast on BBC Radio Scotland, Radio 2 and 3 and Jazz FM. His compositions and arrangements have been performed by ensembles as diverse as the BBC Big Band, Birmingham Contemporary Music Group, Edinburgh Jazz Festival Orchestra and The Glasgow String Quartet and his film and TV work includes music for the 2018 feature film Voyageuse, BBC 2 Horizon documentary: The Right Diet For You, and commercial online promotional videos.

As a pianist steeped in the jazz piano tradition and adept at playing in a variety of styles, Stevenson has found himself in demand from various bandleaders celebrating the work of masters as diverse as Ben Webster, Dexter Gordon, Art Pepper, Count Basie and Benny Goodman. Stevenson has also presented ‘retrospective’ shows with his trio entitled Ellington to Evans, The Shearing Sound and Days of Wine and Roses (a show charting the recordings of Bill Evans and Tony Bennett).

Since teaming up in 2011 with saxophonist Konrad Wiszniewski (Best Scottish Jazz Instrumentalist 2013 and 2017) the pair have performed throughout the UK and abroad with the award winning NEW FOCUS. As well as two albums on Whirlwind Recordings (featuring jazzquartet, harp and string players from the Royal Scottish National Orchestra), live highlights include performances at the London Jazz Festival, Ronnie Scott’s Jazz Club supporting the James Taylor Quartet, a live BBC broadcast from The Southbank Centre to celebrate the 70th anniversary of Radio 3 , and supporting The Afro Cuban All Stars at Glasgow Royal Concert Halls at Celtic Connections Festival in 2018.