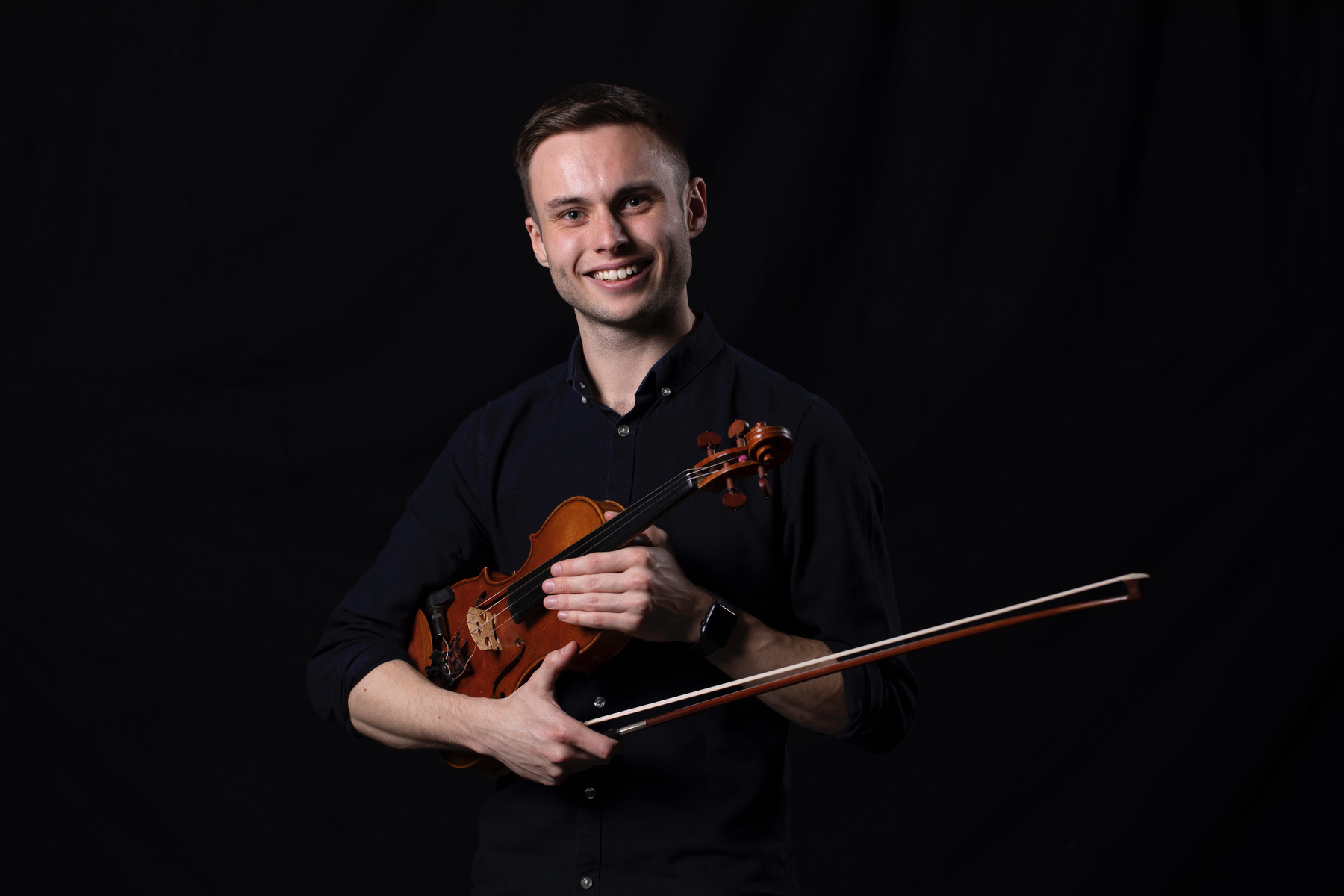 I am Graham Rorie, an Orcadian fiddle and mandolin player based in Glasgow. Like many self-employed musicians my work incorporates a few different roles including performance, composition, session recording, producing and teaching. Whatever comes up at the time really!

The majority of my performance work comes with my band Gnoss, featuring Aidan Moodie (guitar and vocals), Connor Sinclair (whistles, flute and vocals) and Craig Baxter (bodhran). Recently I’ve also been working as a producer and recording engineer at my home studio in Glasgow (Rumley Sounds), it’s been a great experience so far working on new music and seeing the whole process from a different point of view. Before lockdown I finished off new projects by Iona Fyfe, Luc McNally and Calum McIllroy.

My most recent project has been composing new music inspired by the stories of Orcadians who travelled to northern Canada to work for the Hudson’s Bay Company between 1600 and the early 1900s. This new work was premiered pre-lockdown at Celtic Connections in Glasgow with a sold-out headline show in the Mitchell Library. My band featured the talents of Kristan Harvey (fiddle), James Lindsay (double bass), Padruig Morrison (accordion), Rory Matheson (piano) and Signy Jakobsdottir (percussion) as well as a special collaboration with Quebecois quintet Le Vent Du Nord. This project has just been nominated for ‘Original Work of the Year’ at the MG Alba Scots Trad Music Awards.

I’ve been in Glasgow for almost the whole of lockdown. When it first began I’d just returned from gigging in Russia with Gnoss. I had been touring and writing almost constantly since the previous October and had deliberately left the end of March and start of April clear for a break so compared to many, the first couple of weeks of lockdown didn’t affect much work for me. I was very lucky in that sense. Reality hit at the end of April however, when Gnoss’ Danish tour was cancelled, setting the scene for my whole year of live work to be cancelled or postponed.

Mentally, it was really tough accepting that the whole year of work was completely off and there was nothing that could be done to fix it. With that the main challenge was trying to find a sense of purpose with no performances to work towards. As much as I love playing the fiddle, practicing with no end goal isn’t the most fulfilling way to spend your time! To counter that, I decided to submit a funding application to record an album of ‘The Orcadians of Hudson Bay’. I hoped that this would give me a clear focus and drive to work at something that would help financially in the long run and also create work for my fellow creatives at a very difficult time. I was successful with that application and the album is being mastered as I write this. It will be released in spring 2021.

As all the music was scored, rehearsals could be done with demo tracks rather than in person and by working with Andrea Gobbi at GloWorm Studios in Glasgow all the recording could be done in a COVID-safe way. Getting back in to the studio and working ‘regular hours’ was a fantastic feeling (and slightly exhausting). I feel very fortunate to have been able to use this time to work creatively on music I am incredibly passionate about. Alongside this recording, we have also been writing a new Gnoss album that will be recorded over the winter and released next year. It’s been brilliant getting back to writing with the band, we didn’t meet all together in person for over six moths which was really strange considering we are usually working together constantly. Both of these projects have helped make life feel an awful lot more normal!

Over the lockdown I have definitely made huge progress towards setting a more consistent work/life balance. It is really hard as a freelancer to call time on a days work and put things off until the next day or after the weekend. Before the lockdown I left very little time for myself and I didn’t realise I could get the same end results in far fewer hours. Now I am more comfortable minimising the time spent on emails and admin work to make the most of my days with consistent practice (a distant dream six months ago) and making more time for myself. That has been a very positive outcome for me that I’m enjoying a lot.

Times are very uncertain for artists just now and things are changing rapidly. For anyone starting out on a musical career at the moment (or pursuing one in fact) it is important to remember that pandemic or not, your art holds just as much value if not more than before. Don’t let anyone being opportunistic make you feel pressured into giving away what you have dedicated your time to for less than it’s worth. No other industry is being expected to sell their products or services for less so why should we. On a slightly less pessimistic note, use this time to recognise why you enjoy music. Play and write material that gets you excited without considering the end product too much while also allowing yourself to take a break if and when you need it.