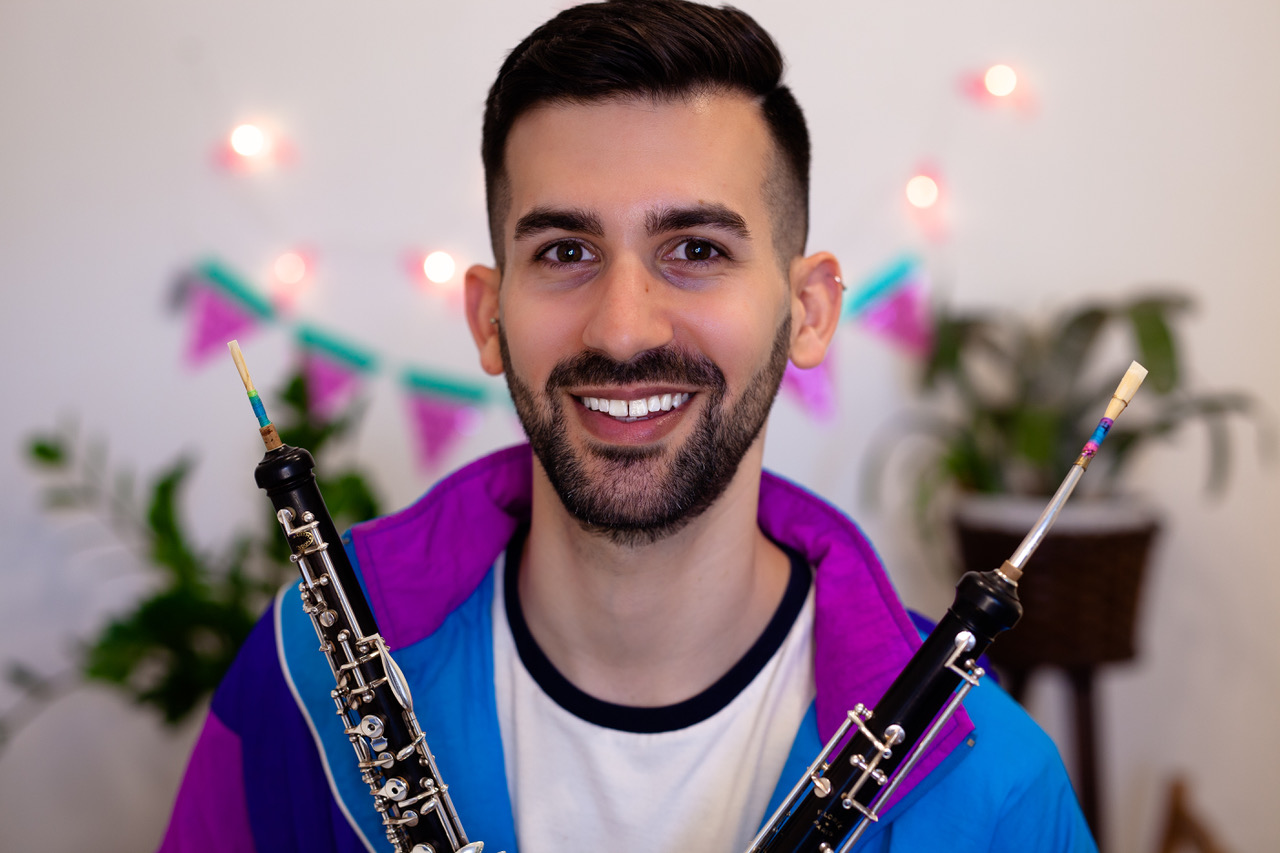 Ron Cohen Mann, a.k.a. @oboeron, brings brightness and optimism to his personal brand of social media with his popular Instagram and YouTube channel. He has been hailed as the “Jonathan Van Ness of the oboe” and proudly projects his queer identity as a role model for LGBTQ youth. He was recently named on CBC’s Hot 30 Classical Musicians under 30. While pre-COVID times brought him to perform regularly with many of Canada’s finest institutions, including the National Ballet Orchestra of Canada and the National Arts Centre Orchestra, he is currently focused on helping musicians create their own personal brands leveraging existing talents and building new skill sets.

Back in March, I was feeling great. I was on the audition circuit and pleased with my progress. On March 8th, I advanced to the semi-final round for the St. Louis Symphony’s 2nd oboe audition; I felt proud and ready to take on the world. There were a few more auditions scheduled for May and June, and I had confidence that it wouldn’t be long until I found myself in the ranks of a great orchestra.

I received an email about my world shutting down on March 13th when I was on my way to a rehearsal for Respighi’s Pines of Rome. When I arrived home, I made myself a checklist of my goals that I would work towards until things went “back to normal.”

One of my goals was to create some educational videos for young oboists. I began working on one but felt too critical of myself and the recording I made, so I shelved the idea.

One of my friends in the Atlanta Symphony started a challenge on Instagram to record all 40 Barret Melodies (famous oboe studies) in 40 days. I was excited to have something to do and a community to hold me accountable, so on March 23rd, I recorded and posted the first Barret Melody.

It was fun to have something to practice for, and to get generous comments from people about my playing. I started realizing that there was a fledgeling oboe community on Instagram—nothing compared to the tightly-knit clans of clarinetists or flutists, but filled with eagerness and excitement nonetheless.

I continued recording a melody daily. It got me actually playing the oboe, and it inspired me to listen to the other interpretations of the same melodies played by talented oboists from around the world.

Melodies 2-15 went by without too much notice but when my 16th melody went viral, I realized that posting online could actually be a great thing for me long-term! I already loved the accountability aspect and engagement with a community, but I caught a glimpse of what an extensive social media platform could provide me.

As the next 24 melodies passed by, I started to notice when a video would take off and when it wouldn’t. I started learning about and experimenting with hashtags and captions. As I was wrapping up the challenge I started musing about whether I could be an “oboe influencer,” if that was even a thing.

After the challenge was over, I made my first YouTube tutorial on the Mozart Oboe Concerto. It was praised by several big name oboe teachers, and I was really hitting my stride on social media. I started releasing weekly YouTube videos ranging from serious tutorials to silly and cute videos like teaching my non-musician husband to play the oboe and introducing a friend’s pug to the oboe for the first time. The response was terrific and my pug video was broadcast on TV’s Right This Minute where I was called the “pug charmer” and a “very good oboist.” On Instagram, I was growing my following by posting daily: creating oboe memes, putting up playing videos, and taking people into my practice process.

In the meantime, I learned as much as I could about marketing, social media, copywriting, and video editing. By reaching a larger audience, I was able to quickly fill my teaching studio with talented and passionate students. I love teaching and find it to be the most fulfilling way to spend my time while I cannot perform live for an audience.

In conservatory settings, we are not taught about self-promotion. In fact, some conservatories advocate against posting on social media. It’s a fine line knowing what content is useful, inspiring, and entertaining to people or whether your posts are spammy, salesy, or annoying. If your content is valuable, there should be no shame in self-promotion. You’re offering your gift to the world—if they don’t like it, they don’t have to click!

I’m currently maintaining and growing my online presence as well as teaching, but I added one more thing: I realized that I could help others replicate what I was doing through social media.

I began working with other freelancers and teaching them how to build a platform online, how to self-promote, and how to provide value to their audiences. I had spent so much time on the platform, learning about what other people were doing, exploring my own branding, and figuring out how to engage with others in a meaningful way, and I wanted to save other freelancers that time.

I created an online course about social media marketing for classical musicians and delivered it to two pilot cohorts. I got some generous feedback about how I was able to help my students sell more CDs, connect with new online students, and book gigs. This is what I want for everyone right now; it’s tragic to see people’s creative efforts wane because those who need their services don’t know about them.

In January, I’ll be relaunching my course, so if this is something you’re interested in, please connect with me by following my blog. I post regularly about social media, classical music, and tips on how to best weather the storm of the pandemic.