I don’t think anyone could have predicted how this year has panned out; it was so unexpected, and terrifying. Before lockdown, I guess you could say my career was ‘on track’ as a classical musician – I was offered a contract with the CBSO straight out of college, offered a numbered job with ESO, touring, doing session work and also on trial for a sub-principal position with the BBC Symphony Orchestra (which I’m technically still doing!) and then suddenly nothing.

The first lockdown was tough. I spent a lot of time on the sofa panicking and religiously following the news. I was excluded from any government support, and wasn’t eligible for Universal Credit initially, which was pretty scary. Everything felt totally out of my control and I really struggled to find purpose.

However, my partner and I were lucky in that we were able to bubble up with our neighbours (who also happen to be musicians by complete coincidence). I started writing string parts for their songs for fun. I had never really tried this before, in fact I remember the year before being asked if I wanted to “put some strings on a track” and specifically thinking “there is no way I’m recording without music!”, because I was so scared of doing it ‘wrong’ and making a fool of myself. Turns out – I really love writing, and funnily enough most of my income during lockdown has come from arranging strings for singer/songwriters, who would have thought!

I’m not really sure why I was so up for it this time. I think it was definitely something to do with the pressures of work being lifted, and having all this creative brain space (definitely a thing!), and part of me felt like I’d hit such a low that “why not, eh?”. I think it also really helped that my neighbours work in a different area of music to me, and I guess it felt like a safe space to try new things because we’re friends.

I was also really questioning if I wanted to pursue a career in music and whether it was all worth it, so I was literally open to trying anything at this point – I even started giving me neighbours tattoos with stick n’ poke. Maybe I could just do that for a living?

I guess I had a lot of creative energy and I didn’t really know where to put it. If anything, lockdown reaffirmed my love for the arts, but it also made me realise that there was a part of my creative self that I had only just tapped into and I wanted to explore this more. Without sounding too dramatic, maybe that’s just part of the reality of human existence? That we can’t have love without hate, tragedy without comedy, or total lack of control without an extreme creative outpouring? I dunno really…

That’s basically how the idea for Her Ensemble formed. It was my way of combining my skills with what I discovered were strong feelings about how things are currently being run in the music industry and turning some of that creative energy into a progressive project that I felt passionate about. Although I am a classical music enthusiast, I also became very aware of the fact that the classical world is full of unwritten etiquette and elitism, and this period of time made me realise that there’s literally no reason why we can’t try doing things in a different way. We are allowed to make up our own rules and being scared of failure isn’t really a justifiable excuse not to explore an interest! After all, letting go of my inhibitions and allowing myself to be vulnerable is how I’ve realised I enjoy writing music!

Her Ensemble is (I think) the first all womxn string chamber orchestra, based on our love of chamber playing – there’s nothing like being in the moment with others on stage. We want to showcase incredible music by female identifying composers, whilst tackling the gender gap in music and make it accessible for everyone regardless of race, gender, class. We recently did a charity project with Pixie Lott, and got so many messages from people who had never seen a string orchestra before. How cool is that?! 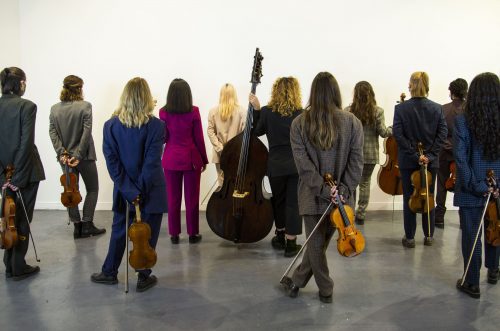 Currently the demographic for classical concerts skews towards an older white audience, but the music itself is there for everyone to enjoy. In March, around International Womxns’ Day, we’re doing a gig celebrating works by female identifying composers throughout history (I guess this is me announcing it!). Last year, just 3.6% of the classical music pieces performed worldwide were written by womxn. Surely there’s room for improvement there!

I think if anything, this pandemic has taught me that life is too short to worry about getting it wrong or being too concerned about what people might think of you. Creative expression is all we have really, and there’s no right or wrong there. We’re all just fumbling around trying to find meaning, aren’t we? I feel like I have more to say than what society and my peers expect of me. We’ve been given this new found freedom, and there are endless possibilities that could come out of it. Nothing is impossible!